If the 1920s were Robert Graves and Alan Hodge’s ‘Long Weekend’, then Noël Coward’s first West End play, I’ll Leave It To You, which opened on July 21st, served as an enticing Friday night ‘amuse bouche’ before the later substantial offerings of The Vortex (1924), Hay Fever (1925) and Bitter Sweet (1929). That decade’s audiences would be spoilt for choice, with 17 plays to choose from and 4 running concurrently in 1925. Coward would quickly become the darling of the Roaring Twenties, an exemplary Bright Young Thing at the forefront of the post–war theatrical boom. But it was this light comedy at the New Theatre (now the Noël Coward Theatre) that began his meteoric rise to stardom.

As Noël Coward, playwright, was introduced to the world, so too was Ivor Novello who made the screen debut (in The Call of The Blood) that would soon lead to him becoming a matinee idol. Nellie Melba became the first celebrity radio broadcaster when she sang two arias for Marconi’s early experimental radio transmissions, the City of Birmingham began funding the first municipally supported orchestra and Gustav Holst’s The Planets received its first complete performance in London.

Famous names to have been born that year included Clive Dunn, Ronald Searle, P.D. James, Ravi Shankar, Captain Sir Tom Moore and Christopher Robin Milne, who would find himself written into the stories of Winnie The Pooh. Another bear was born too, as Rupert Bear first appeared in the Daily Express. 1920 also welcomed the arrivals of literary figures Doctor Dolittle (in Hugh Lofting’s The Story of Doctor Dolittle) and Hercule Poirot (in Agatha Christie’s The Mysterious Affair At Styles).

But what of the theatrical landscape Coward found himself in? The London theatre scene of 1920 was dominated by Oscar Asche’s smash hit, Chu Chin Chow, heading towards its record-breaking 4th year at His Majesty’s Theatre. The other success of the year was an influential revival of The Beggar’s Opera at the Lyric, Hammersmith which would run for 1,463 performances. Not long-dead was Frank Matcham, designer of, amongst many others, the London Coliseum, Buxton Opera House and his oldest surviving building, the Everyman Theatre, Cheltenham. In some ways his departure represented a sea change in the fashionable tastes of the theatre-going public. The Victorian preference for music hall, operettas and Elgar were much in decline, so too were the Edwardian musical comedies that followed them. George Bernard Shaw and Somerset Maugham were well-established names but the stage was set for a fresh, post-war, voice.

Enter stage right Noël Coward: former child actor and then still memorably part of Italia Conti’s young troupe which included Hermione Gingold, Gertrude Lawrence and his close friend and collaborator, Esmé Wynne. The two formed an immediate bond. In their teens, they wrote their semi-serious Rules of Palship, a remarkable guide to smooth friendships (the original is on display at the Noël Coward Room & Library, London). They collaborated on several plays in the years up to 1920 and would co-write the song Faith for Coward’s solo effort, I’ll Leave It to You. Wynne was perhaps the first of Coward’s close working friendships with women and it was only the following year that he would meet his longtime designer Gladys Calthrop, whose artwork features in a forthcoming exhibition at the Guildhall Gallery. He would begin the next decade on stage with another close confidant, Gertrude Lawrence in Private Lives, and the one after that writing Blithe Spirit on holiday with Joyce Carey.

I’ll Leave It to You had its first run in Manchester at the Gaiety Theatre. Coward himself described the play as an ‘amiable, innocuous and deeply unpretentious little comedy’ but The Manchester Guardian disagreed. They considered it "an essay in facetiousness” with a theme restricted to the “idle bourgeoisie.” The Stage newspaper felt that for a light comedy, it rather bordered on farce, describing the dialogue as witty, remarking that “many pungent allusions catch the fancy of the audience”. The review continued, “The piece throughout was greatly relished on Monday; it is some time since the Gaiety rang with such hearty and continuous laughter.” Its farcical nature caught the prevailing taste for humour in a period that would see the flourishing of the long-running ‘Aldwych farces’ as well as Coward’s own comedic scenarios of plays like Home Chat and Private Lives.

The West End transfer on the 21st July was described, again by The Stage as a “bright and entertaining” piece “which should not be taken or judged too seriously” The Times praised it thus: "It is a remarkable piece of work from so young a head – spontaneous, light, and always 'brainy'.” – an approach he would maintain for decades. Coward wrote the play in 3 days. The plot, suggested to Coward by Gilbert Miller, concerns Mrs Dermott, who is struggling to maintain her country house following the death of her husband. Her five idle children are reluctant to help by earning a living until they are spurred into action by their uncle, visiting from South America, where he owns a mine. He privately tells each of them that he has three years to live and will leave them his enormous fortune so they can make something of themselves. They all set to work and achieve success in their chosen endeavour but when he returns eighteen months later, Uncle Daniel reveals that it was all a lie: he is not ill but he is penniless. The family eventually realise that it was for their own good and all ends happily. Coward wrote himself the role of Bobbie, the younger son who becomes a successful songwriter - a somewhat prescient template, though a satirical one. In Act 1, Coward has Mrs Dermott describe Bobbie’s compositions as “beautiful little songs, – mostly about moonlight”, in so doing quickly skewering the trite imagery of the era’s popular songs. He later mocks the success of these in the following exchange:

Daniel. So it is, but there's a lake, there's a lake! We used to sit round the camp fire in the evenings and cook the fish—yes, salmon and cucumber, and sing songs—sweet little homely ditties—your Rose song in particular, Bobbie, was a great success, I must say that——

Bobbie. Don't perjure yourself, uncle, I know perfectly well that it's the worst thing that has ever been written.

Sylvia. It's your most successful.

Bobbie. Of course—I've made literally hundreds out of it—the public wallow in it—roses and passion, and wine, and eyes of blue—it makes me absolutely sick every time I hear it, but still one must write down in this world if one wants to get up.

It is interesting to notice that the very type of composer Coward satirises here is advertised on the same page of The Stage as his Manchester review: Lawrence Wright, whose drawing-room ballads under the nom de plume ‘Horatio Nicholls’ relied heavily on those themes dismissed above (see Heart of a Rose, Will You Love The Violets When You’ve Lost The Rose?, For You a Rose, For Me – A Memory, not to mention the later Romany Rose, Riviera Rose and his lasting 1927 hit, Among My Souvenirs, among which is, yes, a rose). Coward and his partner-in-crime, Esmé Wynne, who played the part of Faith Crombie, collaborated on the single song for the play, Faith. It is a charming pastiche of Edwardian parlour-song solidity with its mononymous title, its yearning suspensions and thoughts of stars, dreams and ‘Love’s shrine’. Added to which, its religious imagery of ‘gifts of God, ‘Lord of Night and Day’ and of course the songs final exhortation ‘give me faith’, are reminiscent of works like Arthur Sullivan’s The Lost Chord. Whilst the romantic double-entendre in this final phrase is unquestionable, the somewhat pious text may have been influenced by Wynne’s devout Christian background (which seems to have provoked Coward, leading to Rule of Palship 9: “We must not talk RELIGION unless it is inevitable.”)

Another glimpse into Coward’s future comes with the character of Uncle Daniel, with his aspirational, albeit fictional, international lifestyle. In 1921, Coward would go to New York for the first time and so begin a life of travel that would eventually land him in Switzerland and Jamaica.The 1920s would also see some of his biggest hits and he would end the decade as one of the world’s highest-earning writers. As for I’ll Leave It to You, he rather left it behind and it has never received a major revival since. Perhaps that’s understandable but its significance in the young Coward’s precocious career is inescapable. He set a course and clearly intended to follow it. Looking back 100 years later, it is easy to see the signs pointing towards Coward style and success, which led him to become one of the century’s most influential figures. Is it now worth revisiting these early works? I think so, but maybe I’ll leave it to you. 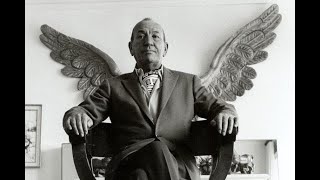 Reviews for Blithe Spirit at The Duke of York's, London